Alice: A Day in the Life 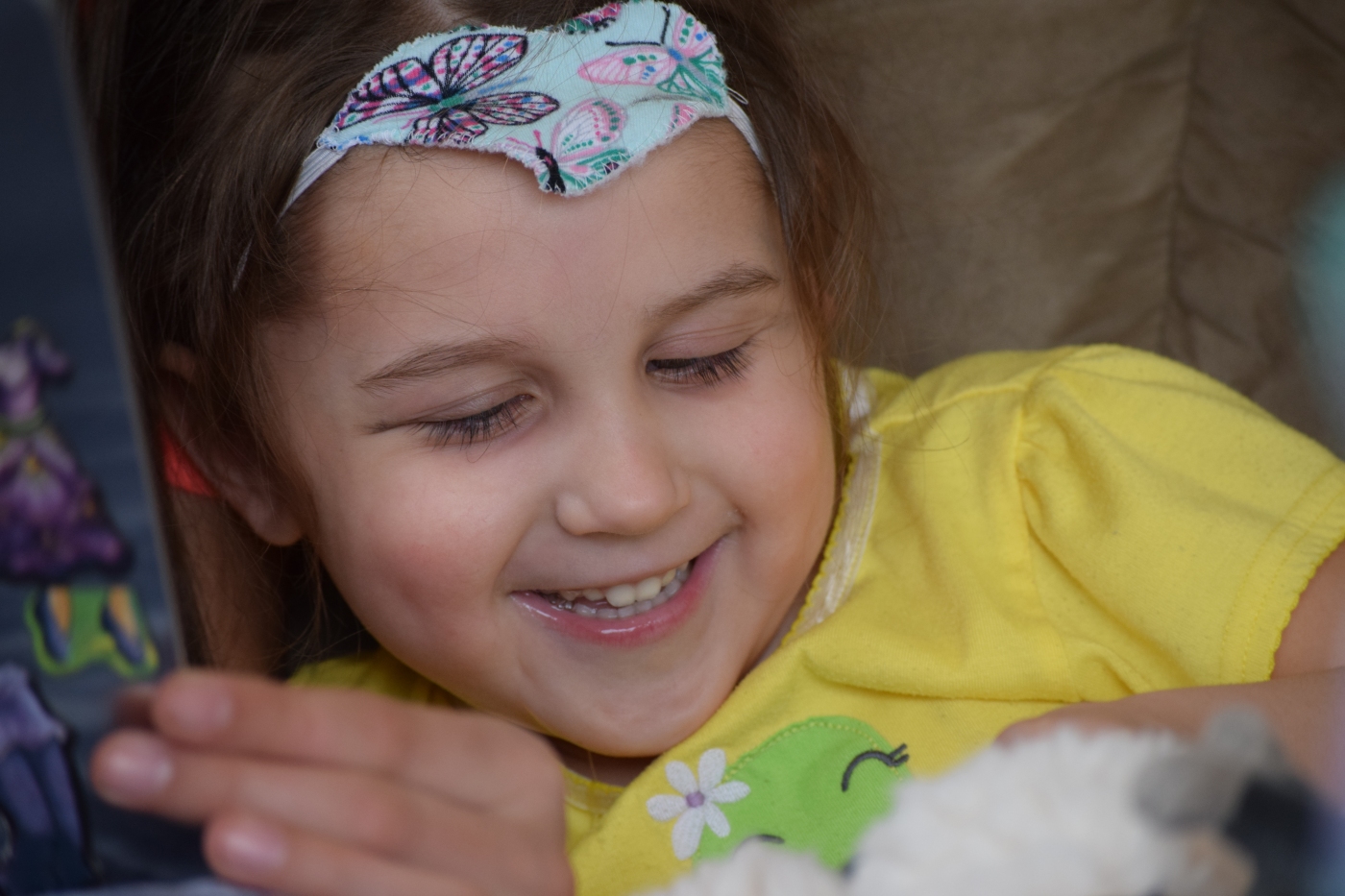 This is not so much to give out new information as it is to give a little window into what life is like for us and Alice these days. Mostly for us, so we can remember what it was like.

It’s Tuesday evening, almost 9:00. I’m sitting at the kitchen table. Today’s visitors have cleared out, and we’re settling back into our normal. In the other room, I can hear Larry, Moe, and Curly poking, slapping, bonking, and insulting each other. “The Funny Guys,” Alice calls them. The last two weeks or so, they’ve been her favorite. Mixed in is the sound of the kids and Shell, chatting, playing, now Natalie’s making plans for a late grocery run. She’s taken over the kitchen side of the domestic chores and has done a wonderful job. I guess the older four are all going along with her. Good for them, they need to get out and grab a breath of fresh air once in a while.

Each of the kids has found a meaningful and helpful role in these days. Emily is, as always, Alice’s go-to playmate, Kylie has become a nanny to Violet, and Jojo facilitates any random whims to play video games or handle little projects around the house.

It’s all so mundane. And I don’t mean that in a bad way. This is life for us, the life we love.

What do you do when your four-year-old is sent home with what is now down to 3-5 weeks to live? It’s not something you practice for or think about. I suppose if I were to script it in a novel, I’d write it full of significant, meaningful moments, like long hugs, long cries, soul-bearing conversations, maybe even the occasional screaming “Why God?” into the midnight sky. I’d think maybe the days would have lots of family prayer, singing, Bible reading, meditations on heaven, you know, really spiritual-minded things. I’m a pastor, after all.

Those things do happen. Occasionally. Sunday morning we stayed home, and I took the time to walk us through what the Bible says concerning death, the divorce of soul from body, the role angels play in the lives of kids and in the transportation of souls from here to heaven, and finally we watched a video clip of Dr. Tom Schreiner walking through the theology of kids who die. It wasn’t necessarily a time of mirth and merriment, but I hope amid the tears we were all fortified with great hope. We need a hope that won’t let us down. The expected, but still disappointing recurrence of her cancer reminded us that all the other things  we’d leaned on (treatments, nutrition, even hope for a miracle) were pretty flimsy. I’m thankful we didn’t lean on them too heavily.

Mostly we’re just living normal life. For us, that means meals, chores, maybe do some reading, some correspondence, sit with Alice while she plays, colors, eats, or watches the funny guys. Since she can’t walk anymore, when she has to “wooz the baffroom,” it’s a little more involved for us than it used to be, but it’s effortless work.

While we’re fully aware that we’re getting down to the end of this chapter in our life, it’s still difficult to emotionally grasp. Partly that’s because with all we’ve been through, we’ve still never been through “the end,” partly because we’ve been living in this mode of impending tragedy for so long it feels “normal” and it’s hard to think of what life was like without it, and partly because we just don’t have much left in the way of emotions. I, for one, feel rather emotionally dead – like my ability to feel pain, sorrow, or grief has been depleted.

I remember back in September when this started, I cried for three days. Then I just couldn’t anymore. When the news came last week, I cried for a day, but now I can’t anymore. It’s rather frustrating. I think perhaps one of the reasons I’m sitting down to write is perhaps to try to jump-start my soul again. I don’t like the fact that my daughter is this close to the end of her life, and I can hardly feel anything. Maybe I can feel something – I feel bad for not feeling.

On to other things… How’s Alice?

Between April 13 and 20, Alice rapidly deteriorated, with each day bringing some new symptom. Sometimes it seemed as though we could see her change by the hour. That was really, really hard. The day after her MRI, Dr. Chris called me and said that upon reviewing her MRI in conference, comparing it with her original one from September, it was possible that her symptoms might be somewhat relieved, temporarily anyway, through a certain treatment that had little to no side-effects. We decided to give it a go, went to Children’s on Friday for it, and after Saturday her slide seems to have stabilized her somewhat. No improvements to speak of, but the daily guessing game of “what’s not going to work today?” hasn’t been played for a few days.

Her right arm now has no function, and her left is rather shaky. She still likes to try to feed herself, and usually does so with great success, but Shelly has developed a little game where Alice is the baby bird, Shelly’s the mama bird, so this morning eating waffles, I look over and there’s Alice with her mouth wide open going “tweet tweet!” Then, with a mouth full of waffles, she flashes a somewhat mischievous sideways grin that says, “I tricked you into doing my work!”

Her smile remains, at least so far, entirely unharmed and in near constant use. She’s such a happy, content kid. Funny that she should be the one putting smiles on our face, but she is. I guess that’s her contribution to the family life these days. Truth be told, it’s been her contribution since she was born. She’s just always been special that way.

About two weeks ago, she strung a blanket between the couch and love seat to make a tent, then put the mattress from the bassinet on the floor, took a blanket and a pillow inside, and called it her “blanket house.” She sleeps there sometimes, including the last two nights. I sleep on the floor next to her (and boy do these old bones feel it!), but I’m not allowed to stick my head inside, unless it’s to read Curious George before she falls asleep.

Speaking of which… she wants to sleep there again tonight, so Shelly and I are going to re-build it quick…

She’s lying down now, and I’m on the couch typing. Alice is kicking me through the blanket, laughing. Now she’s complaining, “some people are waking me up!”

You may recall that her eyes going out of alignment was the thing that tipped us off to this think in the first place. That’s happened again, and sadly in a big way. She wears an eye patch most of the time, because otherwise her eyes strain themselves trying to straighten out.

Sometimes she drools a little, and that bothered her more than anything. She said in disgust, “I spit like Violet!” Sometimes when she talks, she sounds exactly like my 90 yr. old Grandma did when she was suffering from ALS. Not always though.

She looks forward to the mail coming, and her eyes light up every day when there’s something for her. You all have been so unbelievably generous and kind, and she loves it all. Monday the kitchen table was full of packages. FedEx, mailman, and UPS all made a trip to the door. Most days lately we don’t have to go get the mail – there’s packages, so they get brought up to the house. Nice!

Alice has an unbelievably accurate mental inventory of her toys that is updated daily, and her obsessive nature means if we can’t find whatever certain little toy (that’s usually half the size of a golf ball,) the only thing that comes out of her mouth is “can you find my [whatever]?” until it’s found.

Hospice came out to meet with us today. Those are sobering conversations. But as Michele and I had previously discussed, we’ve sort of made that mental switch from hoping and praying her life is spared, to hoping and praying her departure is easy for her, and that we will somehow not be ruined in the process. And I know many of the ones who love her have made that same transition in their thoughts and prayers as well. For what it’s worth, we’re ok with that.

If we were to even attempt to list all the really meaningful gestures, letters, emails, etc., telling us how Alice has impacted lives, we wouldn’t be able to scratch the surface. Just reviewing some of the comments left on the blog the other day I was reminded again of how much this little lady has done, and that without knowing it. We can hardly wrap our minds around the number of people praying for her; from Pastors crying their eyes out to little girls praying for Alice every night, from friends and family to people we’ve never met but who, in this world of amazing connectedness via social media, have fallen in love with Alice and found themselves caught up in her story – we are so very grateful, not to mentioned overwhelmed. To our Lewis Lake family, whatever I say to commend you will hardly be adequate to describe the love and care we’ve received from you. Words are my thing – but I really don’t have any. You are instruments in the hands of the God you serve, and you serve Him well. Bless you all.

I’ll try to keep updated as I’m able. I spent some time on Sunday reviewing our journey, reliving some of the ups and downs, and it’s amazing and not a little tragic how much we forget, and so soon.

Alice has fallen asleep for the night; it’s time to grab some blankets and lay these old bones down next to her. We’re told in all likelihood one day she’ll fall asleep and just not wake up. We don’t think that’s gonna be tonight, but just in case, one of us wants to be there. And tonight “there” is on the living room floor, just outside the door of the “blanket house.”