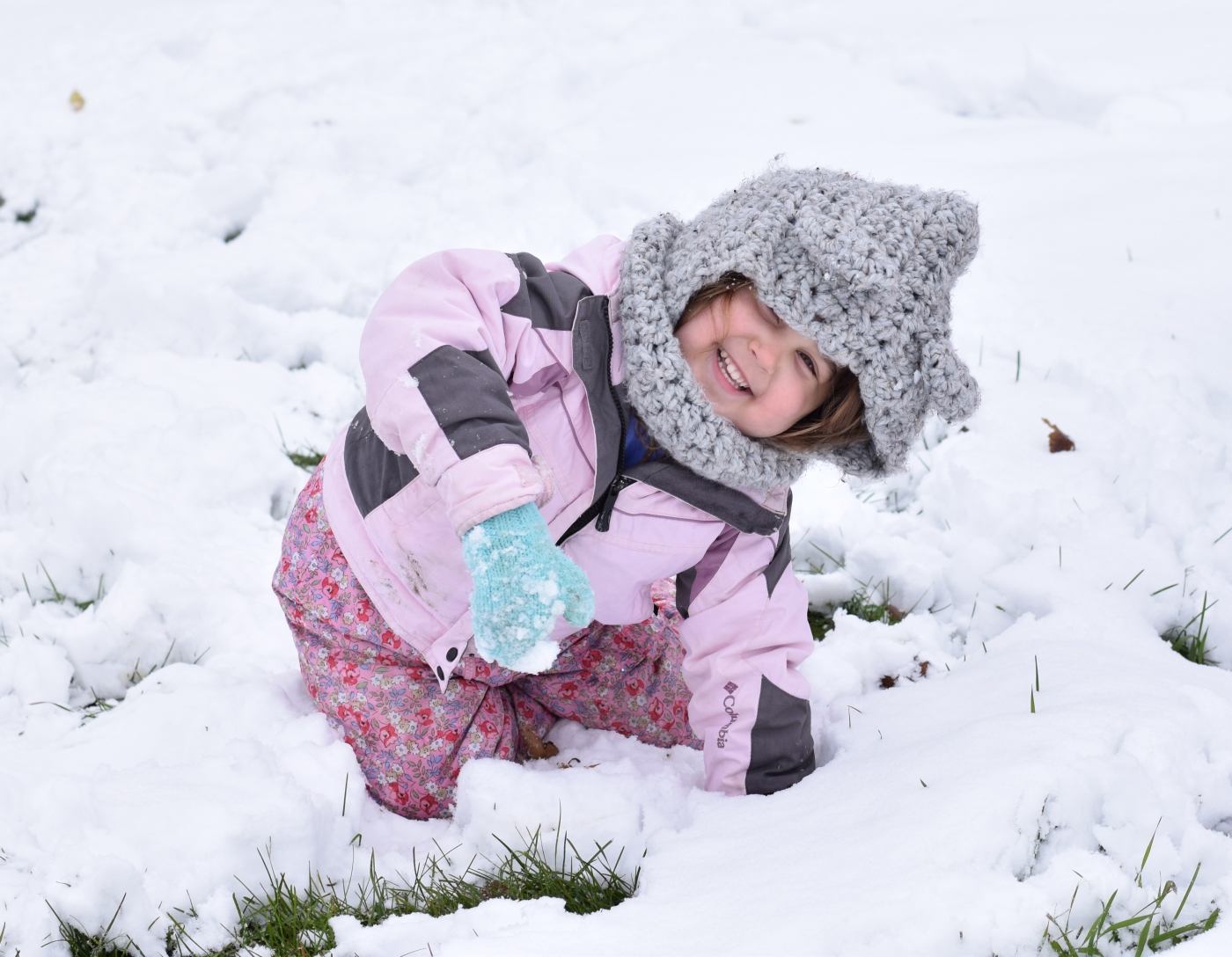 Twenty down. To date, we’ve covered about 2,700 miles going back and forth, held Alice twenty times as she takes that big deep breath that means she just fell asleep, picked her up and handed her over to the radiation therapy guys, kissed her face as she wakes up, peeled off the three EKG stickers she hates so much, and eaten who knows how many bowls of Cheerios and a couple bottles of honey. We’ve made it through SpongeBob season 3, and are well into season 4.

Seven trips to go. Almost there.

One of the little mercies we’ve received is that so far Alice hasn’t needed any transfusions. Radiation diminishes her hemoglobin, so it’s not unusual to need a fresh injection of new blood along the way. “Is there anything we can do to help it stay up?” we ask. No, we’re told, because the radiation shuts the hemoglobin factories down. Once again, you’ll spot my non-technical construction-worker interpretation of medical terminology. (Funny aside… this week I dreamt I was a doctor, and while I couldn’t help the patient with his medical problem, I was able to help him figure out how to build the deck he was struggling with…)

Anyway, back to hemoglobin… Because of the radiation shutting down the “factory,” it sort of is what it is. You can feed raw materials (think certain hemoglobin boosting foods or vitamins) into those factories, but if they’re not operating, they’re not making any “product.” Nevertheless, so far she’s been well inside safe-level territory. I’m watching the downward trend of her count, and it looks hopeful that we’ll make it all the way without any “outside assistance,” if you will. Yay.

Alice continues to improve. She’s once again taken to playing by herself, something she used to do often, sometimes for hours at a time. The other morning on the way to the hospital I wanted so badly to freeze time as she played in the backseat with her little dollies, her sweet little voice sounding like the most beautiful music in the world.  She even spent a little time in the shop with me this week. That used to be one of her favorite things, and something that endeared her to me in a special way.

Her appetite is down, her weight is going back down, and her mood is inexplicably cheerful. Her nurse told us today that kids going through what she’s going through just aren’t as happy as she is – ever. She really is happy, almost all the time. A little sleepy, but happy.

And she says Psalm 23 again. She still doesn’t like to say it with all of us, but she says it herself, and it’s beautiful. I’ll try to sneak a recording of her saying it and let you hear it.

She continues to enjoy all the cards and gifts that are sent her way. We continue to be amazed at the outpouring of generosity and affection shown to us and especially to her. And we are so thankful for all the prayers offered up on her behalf – may they be heard!

She vomited again this morning. That appears to be something we’ll have to live with for the next week and a half until this is over. I’d just given her some juice with her meds in it, she drank it and immediately threw it up – all over the bed. Kids puking in beds used to be irritating, but somehow it’s not so much anymore. The first night we got home after our initial stay in the hospital, I was sleeping next to Alice, she wet the bed sometime during the night, and I woke up to find myself soaked in urine. My first thought was, “I’m just glad she’s here to pee the bed.” Better to have a bed-wetting little Alice, than no Alice at all. All about perspective, I guess.

I managed to “score” another pillow case today. When the radiation guys put her back in bed before they send her back to her room, they put a pillow case underneath her, and sometimes when we’re leaving and I scoop her up, I get that pillowcase along with her. Of course I never realize it until it’s too late and we’re almost to the car. Ah well, just put it on the tab.

Wednesday after radiation we made it to within a quarter of a mile of the house, only to come up to stopped cars in front of us. As we got closer, we started to see flashing lights. Lots of them. Ahead of them, even closer to our house, a helicopter sitting in the middle of the highway. Oh please, not the kids! A quick, almost panicked phone call told us our kids were safe, and utterly oblivious to what was happening in front of the house.

We found out later a lady in her early 40’s in a smaller car drifted across the centerline on the curve and met a Dodge Ram head on. She didn’t make it.

As we turned the car around to go around the block and get home from the other direction, I couldn’t help but remember once again how fragile life is, how suddenly it can change, how quickly it can end, and how many people find themselves in the midst of terrific tragedy. Here we were, with our little Alice in my rearview mirror, and in front of us, a scene of sudden, unexpected death.

Then I felt bad for saying, “Not my kids!” Because it was someone, whether that someone was mine or not. It was someone’s daughter, someone’s wife, someone’s mother. Maybe I wouldn’t have to go through the gut-wrenching sorrow because of the scene almost in our front yard that day, but someone was going through it. And like never before, I felt really sad about that.

The world has lost some of its charm over the last month and a half. I hope I don’t go totally cynical, and I don’t want to lose my enjoyment over the pleasantries still available to us, but to be honest, it’s just not as thrilling anymore. It’s a difficult place to live; indeed it’s a difficult place just to remain alive – so many things can go so wrong, as we are experiencing. I’m just now beginning to be able to lift my eyes up from our own significant struggles and sorrows and see how much company we have in these dark valleys.

I think sometimes of little girls or little boys who don’t have terminal cancer, but they’re sex slaves. I think of people who live in loveless, miserable marriages for decades. I think of parents who have to watch as their kids grow up, violently rebel, and self-destruct. What Shelly and I and the kids are going through is real, and it’s painful, but it’s by no means the only miserable thing going. I’m more alert to that now.

My mind turns to the Lord Jesus. It goes there because everything in me screams, “Someone needs to fix this mess!” This world is a stinking mess. Part of me, a big part of me these days, can’t wait to get out of it. But more than that, I just want to see it get fixed fully and finally, once and for all. I want to live in a world where little girls live forever, where happily ever after really happens, where mommies never die in car crashes on their way home, where all the injustices are made right, the dead come back to life, and things are ordered in a perfect, permanent way, the way that I know, deep in my heart, they were meant to be (and were!) in the first place.

Jesus is, after all, the only hope we have for that kind of restoration. The Christmas season is fast approaching to remind us of that once again, and I for one need the reminder. I’m learning, in a fresh and new way, to seek first His kingdom and His righteousness, and let Him add, and even take away, all the other stuff as He sees fit, until He’s ready to finish the job He started back in Bethlehem.

Even so, come Lord Jesus. Until then, if You would please, leave Alice here with us. If not, we trust You. We’ll just need lots of extra help to make it through.

I should mention this before I sign off… on Saturday, December 9, some of the folks from church are putting on a spaghetti dinner for us. By that time, Lord willing radiation will be done and Alice will be mostly recuperated from it. The details are here. Come eat spaghetti and say hi; we’d love to see you, and love for you to see Alice. I say this to my shame – I’ve never been to one of these benefits before, so I have no idea quite how it all goes down. But it’ll be fun, I’m quite sure. We’d rather see you than your money, so just come. I’ll steal some money from Shelly and buy… At any rate, the Lewis Lake folks do nothing that doesn’t involve drinking a lot of coffee, eating a lot of excellent food guaranteed to expand your mind and body, and copious amounts of socializing. So I’m up for all that. Hope to see many of you there.