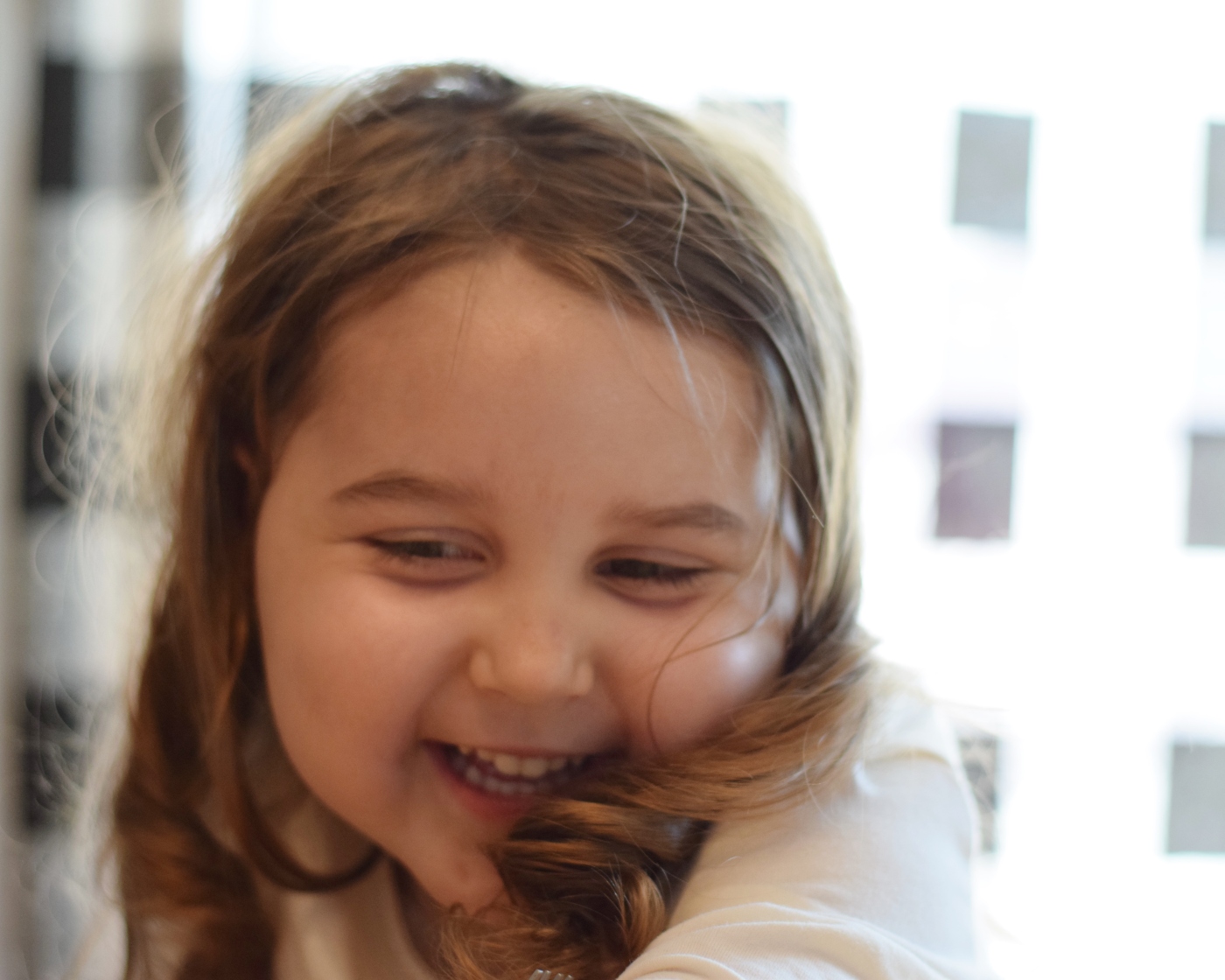 Ten down. Something like 17 to go. Early mornings, lots of miles, SpongeBob, Cheerio’s (with honey!), sedation, and radiation. That’s our routine. It’s amazing how fast it becomes “normal.”

It’s working. Alice’s smiles, giggles, and sparkly eyes are once again rather common sights and sounds in our old house. And that’s been wonderful.

But the joy is somehow tinged with sadness, too. This is how it goes with her kind of cancer. You knock it down, it comes back. You feel like you get your girl back, but in the back of your mind you can’t help but think you have to lose her again, and that stinks.

I try not to live there. I’m trying so hard to live in today, and if I must look to the future, I want my gaze to skip from tomorrow until 10,000 years from now, when faith is sight, tears are gone, and death is fully and finally swallowed up by completed redemption. But sometimes I fail at that.

It’s no more possible to write a compelling and intriguing account of this past week than it would be to paint an awe-inspiring masterpiece of the floor underneath our sofa. It was just pretty boring. About the most interesting thing was making oatmeal for Alice instead of Cheerios one morning.

I was a little concerned Monday when Alice didn’t snap right out of sedation per usual. Instead of awake and eating in 5 minutes, she slept for 10, then 15 minutes, after that I watched for another 10 minutes as she slowly woke up, as if coming out of a dense fog. I did a little bit of asking around the next day and discovered they’d upped her sedation meds, which I kind of suspected since I typically watch them administer the first blast, and thought I saw an extra little bit go in.

I get it – they don’t want her moving under radiation. And it’s possible to build up a bit of a tolerance to it. But I discussed it with the anesthesiologist and Tuesday and Wednesday we went back to the original dosage, and then she snapped out just like before.

Thursday was another slow wake-up day. So I chatted with the anesthesiologist again about dosage and such – not to be a jerk, I hope – but I really want her to have to take in as few meds as possible. So I was very apologetic about raising my concerns. Building houses, I know the frustration of having my area of expertise second-guessed endlessly by those who really have no experience in my field, and I really wanted to follow the Golden Rule as best I could.

So as I said, for the fifth time, “I’m really sorry, and I’m not trying to cause a fuss, I’m just trying to understand what’s happening and why,” our almost daily companion at the hospital, Amy, said, “No, you’re advocating for your daughter, and that’s a good thing.”

I thought about that on my way home. Alice couldn’t speak for herself, and if she could, she couldn’t really have a halfway intelligent conversation about her treatment. I can’t have a halfway intelligent conversation for that matter, this is all way beyond me. But here I was, trying my best to work with those who were also trying their best to help her, and together we were going to give Alice the best care possible.

I was reminded of our heavenly Advocate, our sympathetic High Priest, who stands between the Father and us, constantly interceding on our behalf. Sometimes it feels like, and we verbalize this often, this journey is going to bury us. How are we ever going to make it through this? I thought of the Lord Jesus, who lived where we live, who almost certainly stood by the bedside watching His earthly father die, then comforted his mother, picked up his tools, and went out to provide for His now fatherless family, the thought of that Lord Jesus, in the ear of the Father, making sure that my family and I wouldn’t be completely and hopelessly buried in these wretched hours brought great comfort to our hearts. It’s good to have an Advocate in high places.

I say this every time, but we continue to be amazed at the outpouring of love, affection, and generosity on our behalf. These days, almost everything seems somehow burdensome. We’ve discovered, though we haven’t yet figured out why, that when we step out of the house without Alice to go do normal, ordinary stuff, we are drained very rapidly. Michele took the girls out for lunch earlier this week, and had a wonderful time. But she returned so anxious to be home, and thoroughly tired out. I took my son to Cambridge to get his driver’s permit paperwork buttoned up, and in the two hours or so of being gone, I was just plain running out of gas.

So we are so thankful for the people of God, for friends, for family, and for complete strangers who have stepped in to take so many burdens off our shoulders. We occasionally buy a gallon of milk – otherwise, food, excellent in flavor and massive in quantity, shows up at our door. Our finances have been of no concern to us – I can’t tell you how many people have sent money to us, so freely and generously. A friend fixed our driveway, out of the blue. Friends and family have bent over backwards for us.

The weird part is, and I hope I can make this come across right, I now fret about my inability to acknowledge and give thanks for everything that is coming our way. We have been gloriously inundated by the kindness of God’s people, and I worry that they won’t realize how much we appreciate it, because I know we’re going to forget to say thank you to someone, forget to send a card, or neglect to somehow express our gratitude.

We know, of course, that no one gives us anything to get a thank-you. But it’s a weird feeling I’ve not quite experienced before. I guess most relationships are sort of built on this give-and-take system that roughly equalizes itself, and for the last month, we’ve been on a streak of being given to, and have nothing to give back. It’s even been hard to just open the door for company, and that’s been difficult, because we really do want to have it open. So we’re feeling like we’re becoming buried in a mound of impossible relational debt. And again, I know that’s not the case, and no doubt everyone who has helped us so generously would tell me to not feel like I do, but still, it feels that way. So these are some of the strange things we’re having to work through in our hearts and minds.

Another tremendously helpful thing I’ve learned this past month about God is this: I don’t think I could count the number of times people have said to me, in all sincerity, “If there’s anything we can do, please, just tell us!” I believe them; I’ve said the same thing to others when they’re struggling. Here’s my conclusion: God programmed us to be this way. He made us naturally sympathetic to the struggler. Shelly and I would do and spend anything for our Alice in these days, but most of you would too. And that tells me that God has put this in our hearts.

And it occurs to me (and my Dad helped me understand this) that people are this way because the God who made them is this way. We are, after all, created in God’s image. And God is the ultimate helper of the struggler. I’ve learned much about our Creator by watching His creation come running to our aid, and running to us with tears, with encouragement, and with anything and everything that could possibly help us. It’s not at all unlike our God who gave His only Son. Why? Because we were struggling. Lost and damned would be better, more biblical terms, but the reality is, His heart reached out to us in our need.

And so I think about that whenever someone is driven, as if by some unseen force deep in their soul, to reach out and help us, that they are simply reflecting the tender love and compassion of their creator. We need to know, in these days, that God still loves us. We need to feel that God cares about us. Sometimes, to be honest, it doesn’t feel that way. But we are reminded that He does, every time someone says to us, with tears in their eyes, “I just wish I could take it all away!” What a marvelous representation of a kind-hearted Creator, yearning to come to the aid of His desperate creatures. So we are indeed thankful, in so many ways, for the many kindnesses to us.

photo – Nobody in the world smiles like this over a bowl of ramen noodles. Except Alice. It’s painful to see her face so swollen by the meds, but a thousand times more joyous to see that smile return.

Unbeknownst to us, my dear sister-in-law Miranda setup a gofundme for Alice for anyone who wished to help in that way, and my wife’s cousin asked me to post a link to it, so that’s here